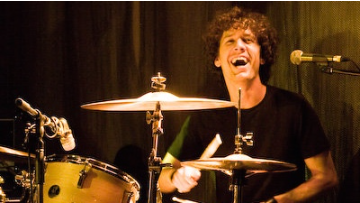 Paul has been passionate about music since he can remember. His first musical love was the drums and he was inspired from an early age by Keith Moon, Neil Peart and Animal from the Muppets. At age 12 (after much begging and pleading) he received his first drum kit and began lessons. He played constantly throughout High School; both in rock bands as well as local orchestras and theatre groups. Never one to focus on just one thing, Paul also began to teach himself guitar and bass.

Paul has toured Canada, the United States, England, Scotland and Wales and New Zealand with various groups. He has shared the stage with such acts as Garth Hudson (The Band), The Beautiful South, Thornley, Fiction Plane, The Parlor Mob and Dan Mangan. His music has been featured in commercials, TV and Film.

After extensive travels around much of the world during 2010, Paul began to pursue Songwriting, Piano, and Voice. Since early 2013 Paul can be found in his adopted home of Auckland, where he is actively gigging, teaching and doing sessions and workshops. He is currently teaching drum kit, guitar, bass and keyboard.

In the recent years he won first place in the MusicWorks drum off and released his first solo work (where he wrote, sang and played all the instruments) under the moniker "The Ever Wandering." He's also quite busy playing at weddings and events with various bands and duos.

More info, music and photos are available at:

Paul teaches at these venues: