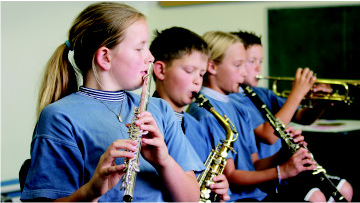 MusiqHub currently caters for over 3000 students in more than 200 venues right across New Zealand. Lessons are held from Queenstown to Welsford, in primary, intermediate and secondary schools along with community centres and home studios. Read below to find out how New Zealand's fastest growing music school is raising the bar in music education right across the nation.

MusiqHub began in 1997 when as a teacher Dean was asked to tutor some of the children in the school where he taught. Beginning with only four students Dean used his knowledge of teaching and learning to ensure the lessons were enjoyable and productive. The lessons quickly grew and soon students from schools across the North Shore of Auckland were coming to receive lessons. At this time Dean named the lessons 4Front.

Between 1999 and 2004 Dean began to systemise the teaching programme and built a large database of songs that would form the basis of the current programme. As more and more students began to attend the lessons one common theme began to emerge. It wasn't just the programme that was successful; it was also the teaching methodology that contributed significantly to the success of the young musicians.

During 2005 Dean continued developing the lesson format while also employed as a school teacher and sought to connect with other like-minded guitar teachers and began the plan for taking 4Front North Shore wide. Around this time 4Front developed a close link with music stores and soon this link was formalised.

2006 saw the beginning of Shore wide lessons. Part of the vision was a desire to make lessons as convenient as possible for people. Four venues were selected from across the shore and lessons soon began to fill up. During this time 4Front employed quality tutors to teach the programme and the year started with over 100 students enrolled in guitar lessons. As the year progressed new venues opened and links were formed with a number of primary schools from Silverdale to the Devonport peninsula and by the fourth term over 200 students were enrolled in the lessons. Soon guitarists were performing at their schools as well as in many other situations.

With the widespread success of the lessons a Student concert was organised for November 2006. Its aim was to give the students a full band experience. Students got the full rock star treatment as they went backstage and had roadies tune their guitars, walked the long corridor before the gig and spent time in the green room complete with M&M's and closed circuit TV with a video link of what was happening on the stage. Finally they entered the stage to the rapturous cheers and applause of the 500+ audience. Once on stage they got to play with a session band packed with some of the top musicians around while the audience clapped and sang along. This was the first in what is now a regular event for the Musiqhub students across New Zealand.

2006 also saw a shift in the model of educational service offered. It had been operating on the music school model with the added difference of giving training and support in the programme to all the tutors. While this was a good start it soon became clear that there was a better way to offer lessons, a way known as the Future of Music Education. This model of service is based on a franchise system where individual teachers are resourced, trained and developed in the programme and contributing material. This allows individual tutors to offer the best in guitar lessons and means that you are not dealing with a middleman.

2007 saw continued success with new schools getting involved each term and the Future of Music Education model in full swing. With training and support teachers quickly developed great reputations through quality service and excellent results. Soon over 350 students where involved in guitar lessons including students in Tauranga and Whakatane. This exciting step was the first in the overall mission to see quality lessons firstly right across New Zealand, then Australia, south east Asia and out to the world.

2008 saw a number of new Teachers involved and lessons beginning right across the wider Auckland region. It also saw the continued growth of lessons throughout the wider Bay of Plenty and really proved that the educational model could operate anywhere. By the end of 2008 11 teachers where teaching a total of 900 student and this meant eight big end of year concerts. With 6 concerts in Auckland and 2 in the Bay of Plenty it was a busy time. Over 3000 people attended the concerts with families and friends coming from near and far to watch their students do their thing live in concert.

In 2009 four new teachers started teaching the 4Front programme in Queenstown, Dunedin, Palmerston North and Hamilton. Along with the Bay of Plenty and Auckland Lessons were offered in over 100 schools through New Zealand. At the end of 2009 competing music schools were approached to see if there were any possible ways of working together. Alan Kemp, who was at that time the owner of KBB Music, saw a great opportunity to grow what was then the KBB School Band Programme. The programme was separated from the store and given a new name. The Allstar Band Programme.

So in 2010 the future of music education model was not only operating in Guitar but also with Saxophone, Clarinet, Flute, Trumpet, Trombone and Percussion. Through 2010 and 2011 all the lessons grew through out New Zealand and further connections were made with the School of Rock and the Kids Music Company. A new name was give to bring all these programmes under the one banner. MusiqHub.

MusiqHub now has programmes in nearly every instrument and are progressively offering them throughout New Zealand. If you are intyersted in teaching with MusicqHub or would love to have lessons where ytou are please contact us and we'll make it happen.

Want to find out more?