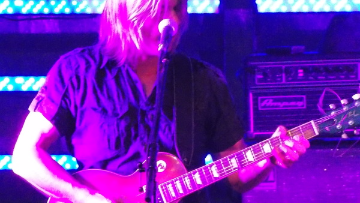 Musiqhub Manawatu offers tuition in guitar ukulele vocals and drums at participating schools. We provide weekly lessons during term time and organise performance opportunities and recording experience for enrolled students. Find us on FaceBook and check out a student recording session https://youtu.be/hw_HxRWi8WE

Craig, Maria and Angus are experienced musicians and tutors who enjoy sharing their knowledge and skills with students around schools in the Manawatu.

I had an anxious moment recently while performing I thought I'd share with you ...

On Friday I was up at Waiau Country Estate, a beatitiful restaurant and function centre north of New Plymouth. The band was setting up in the afternoon to play for a private function in the evening.  After the set up the guys went back into town and would be back to start at 8:30pm . Because I'd driven from Levin that day, I decided to stay on for the afternoon and relax a bit in the awesome park like surroundings and check out the beach before we played.

After a walk down to the beach and back, I had a few hours to kill.  As I had my acoustic  guitar in the car I offered to play some background instrumental music in the outdoor dining area which the owners were OK with. Just as I started playing, a little white terrier that belonged to the owners walked up and sat directly in front of me staring into my face.

I had this moment of panic when I thought ' ...  the dog is going to start howling !!! " I sent up a quick prayer and kept playing hoping not to upset the dog,  and after a while he relaxed and lay down with its head on its paws looking like he was actually enjoying the music ! (Yay)  People who came in to eat and were kind enough to compliment the music also which was good of them, and the restaurant shouted me a meal which I also appreciated,  but the opinion  I was most grateful for was my four legged fan in the photo attached ! Craig teaches at these venues:

Hi Craig I have attached a video of you & Jacob playing "I Walk the Line". We are so proud of Jacob, he did so well. To be on stage playing in front of an audience with just the two of you is not something he would have been able to do a year ago. Chris & I want to thank you for everything you have taught Jacob. He has come a long way with his guitar and really enjoys it. We know he will keep it up. Thanks again. Regards Nikki

Just a quick e-mail to say we would like Luke to continue with guitar lessons at Rongotea school next year. Also we would like to say that we thought the end of year concert was fantastic. Jason (Lukeâ€™s dad) was so inspired he has gone out and brought new strings for his guitar and intends to have a â€œplay around againâ€ (maybe he can practice with Luke!) Thanks again Tania

Hi Craig Jayden has really loved his lessons with you this year so we are wanting to re-enrol with you for next year, if you have a place for Jayden and for his older sister Mya that would be great.

Hi Craig Elton and myself (along with our other two children) would like to thank you immensely for the fantastic guitar concert you held a couple of weekends ago. We are not a "musical" family and having Charlie being so interested in the guitar has meant we have had to become interested by default. We have supported his weekly lessons and enjoyed listening to him practise (especially on his electric guitar). We couldn't have enjoyed the concert more and my husband said he would have "gone again the next night". So there is some feedback from some "unmusical" folk who really appreciated the time effort and high quality of your show. Thank you so much.